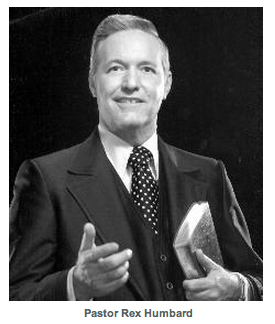 In 1906 Alpha Rex Emanuel Humbard began a ministry in the outback rural region of Arkansas. Pastor Humbard was known as a “Circuit Riding Preacher”. He traveled by horseback and mule from one small Arkansas town to another to preach and give an invitation for those in attendance to dedicate their lives to the Lord. In 1933, his eldest son, Rex Humbard, at the age of 13 dedicated his life to the Lord and began a daily radio ministry on KTHS radio in Hot Springs, Arkansas. From that time forward, the Humbard family was involved in radio and television until this very day.
The early days of broadcast ministry.

In 1952 God placed a calling upon Rex’s life to locate his work for God in Akron, Ohio; found a church known as the Cathedral of Tomorrow and begin a worldwide outreach through television and radio. This was clearly the calling of God, borne largely on Rex’s complete faith and resourced by thousands of committed Christian followers across North America and eventually circulating the globe. Countless multitudes of lost souls have come to faith in Christ through the past decades as a direct result of this unique ministry. 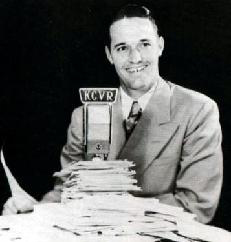 In the years that followed many other religious ministries began their work through television, but Rex and his family “turned the fertile soil of Salvation to sow the seeds of faith in the hearts and lives of a lost and hurting world.” At its peak the programs of the Rex Humbard Foundation were seen on more than 600 stations in the United States and Canada, and also more than 1400 additional stations around the world. The services were broadcast in 77 different languages. Rex, himself, was amazed to see how the Lord would move in the hearts and lives of those who tuned in each week to hear his simple Gospel message of salvation. 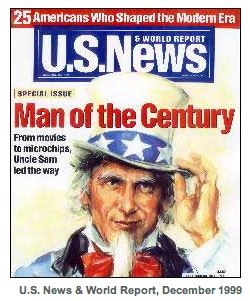 The crowd outside O’Neil’s Department Store in Akron, Ohio caught Rex Humbard’s eye. They were huddled around a contraption called television, marveling at a Cleveland Indian’s game. The screen’s hypnotic power amazed Humbard, a fiery Arkansas evangelist passing through town. He realized on the spot that his mission was to become the first evangelist to spread the Good News via the cathode-ray tube.

Humbard purchased an old movie theatre in Akron, christened it Calvary Temple, and began broadcasting in 1953. He later built the $4-million Cathedral of Tomorrow, a 5,000-seat arena replete with velvet drapes, a hydraulic stage, and a giant cross covered with thousands of red, white and blue light bulbs. At the show’s peak, 20 million people worldwide tuned in weekly to hear Humbard’s folksy admonition: “What America needs is an old-fashioned, Holy Ghost, God-sent, soul-savin’, devil-hatin’ revival!”

In his 1941 editorial in Life magazine, Henry Luce, called upon his compatriots to accept the challenge of world leadership. The American people hardly needed in the invitation. Tinkerers, thinkers, entrepreneurs, and entertainers were all ready hard at the task.

Today, their handiwork can be seen around the world—from the Golden Arches of McDonald’s to the theaters in Prague where moviegoers watch with great interest Leonardo DiCaprio try to survive a sinking Titanic. Some like jazzman, Louie Armstrong, are renowned both here and abroad. Others, such as internet pioneer J.C.R. Licklider and career technocrat Frank Turner, the father of America’s Interstate Highway System, toiled in relative obscurity.
Rex Humbard was honored by U.S. News & World Report when he was named one of the 25 “Principle Architects” of the American century.

In the late 1960’s, Time Magazine came to Akron, Ohio, to meet with Rex Humbard in preparation for a feature story. The magazine’s editor-in-chief himself flew to Akron to write the story.
After meeting with Rex and his family for many days, he explained to Rex that he did not know what to call Rex Humbard and his ministry. As the editor understood things, Rex was was a pastor, evangelist and a television preacher. When the article came out in print, the editor had chosen a unique phrase to describe Rex, referring to him as simply “the Tele-Evangelist”.

This was a totally new phrase, never before used to describe a television pastor. Several times over the past decade, on the popular gameshow Jeopardy, the question is asked, “What famous TV preacher was the term ‘televangelist” created for?’ The answer to the Jeopardy question: “Who is Rex Humbard?”

“Today, Rex Humbard has come closer than any other human being in history…to preaching the Gospel in all of the world…more than any other evangelist, he has taken up the challenge.” (Time Magazine)

“Putting God on Main Street has been the goal of this dedicated preacher for more than 60 years. Now, thanks to the electronic media, his ‘main street’ stretches from Ohio around the world.” (Saturday Evening Post)

“One of the distinctions of Rex Humbard’s ministry is the popularity maintained in South American countries, especially Brazil, where during a recent crusade appearance in Rio de Janeiro, more than 180,000 people filled a soccer stadium to hear the word of God.” (Fort Worth Star Telegram)